Technology and Health: The Problem 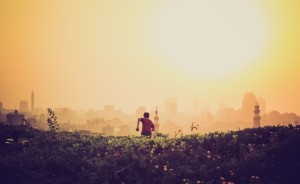 After years of helping people save money, meet people, get places, search for things, find things, learn things and just about a million other tasks, technology has recently begun getting serious about health. Smart scales, step counters, heart monitors, sleep trackers…there’s a big push to figure out how technology can make us all happier, healthier and more attractive.
The quantifiable self is a term that Silicon Valley feels holds a key to this revolution in health. And in some ways it makes sense—fitness, at its core, is really simple math: if you expend more calories than you consume, you lose weight. If you run father than you did last week, your progress has a number attached to it. More sleep? Also a quantifiable amount.
This approach makes absolute sense to three types of people and is utterly useless to everyone else:
People who are successful in tech, often fall neatly into one or both of the first two categories, so it’s no wonder that they’re pushing this approach on the rest of us. It’s also a small wonder that this approach is failing to capture the hearts of consumers in a big way, because it fails to account for the majority of the population who don’t fit into any of the categories above.
My opinion on this is based on some experience. About three years ago I got really into health. I started a running program, began lifting weights and radically altered my diet. I changed my habits and my perspective, lost weight, got healthier and almost no math was involved. In fact, I quickly found that measuring my progress was not just useless, it was dangerous.
Let’s consider diet for a minute. It’s a common goal of people to lose say…20 pounds. “If I only lost 20 pounds, I’d be really attractive” they think. And they make this a New Year’s resolution and set out with a crazy, unsustainable diet and a work-out plan they hate. Every day they monitor their weight, compare it against their arbitrary goal (20 pounds) and one of two things happens: either they become discouraged because their weight-loss seems to plateau, or they hit their number and celebrate by quitting the gym and going right back to their former diet.
This is not the way to success. In fact, this way can have almost no outcome but failure. Why? Because we’re gauging our success against a useless metric. Weight is possibly the least effective goal and way to measure progress because 1) we often have no idea what a healthy weight is (don’t forget, muscle is heavier than fat, so we can get fitter and heavier) and 2) weight loss isn’t fixed, it diminishes as you get closer to your healthy weight. So while you might lose 10 pounds your first month, following the same diet and routine, you’ll only loose 5 pounds the next, and 3 the month after. If we’re only focused on the number, this gets increasingly discouraging because we feel as if we’re not making progress.
Now let’s consider the danger of tracking your weight lifting numbers. Every week, you’ve been adding 10 pounds to your bench press, and you LOVE seeing your progress measured…until you get injured because you’re obsessed with the idea of lifting 300 pounds and fail to listen to your body.
Numbers ultimately aren’t super helpful for getting people to make meaningful, lasting changes to their life. And this, in my opinion, is why glut of health tracking products has failed to catch on. Yet despite the modest-to-uninspiring sales, technology keeps pushing ahead with this approach. They are abandoning the core principal of success by continuing to push the approach and features every year.
I think technology needs to take a step back. The metrics we’re seeing are a result of a platform-first approach, not a user-first attempt to problem solving—that is, we’re seeing devices jammed full of sensors because it’s a new capability, not necessarily because it’s the best way to change behavior. My intuition is that the devices that are on the market are a result of a really excited tech guy yelling, “Hey, we can now monitor your [insert health metric here]]!!! PUT THIS IN A BRACELET AND SELL IT RIGHT NOW!!!”
That’s not going to work. What’s needed instead is a user-centric understanding of the problems and their solutions…

The Real Problem With Wearables