New York Life has a tremendous number of legacy software programs, each for various niche purposes. TXFM was an old green-screen system created to help Customer Service Reps enter tax information from clients. It had puttered along for years without much attention until some regulation changes prompted the company to make some updates. As part of this update, the team was interested in adding some much-needed usability improvements, which led them to my team.

After a number of successful projects, the UX team had gained some minor internal fame. I led the project, overseeing (and carrying out) most of the research, design, and project planning while overseeing some junior team members. 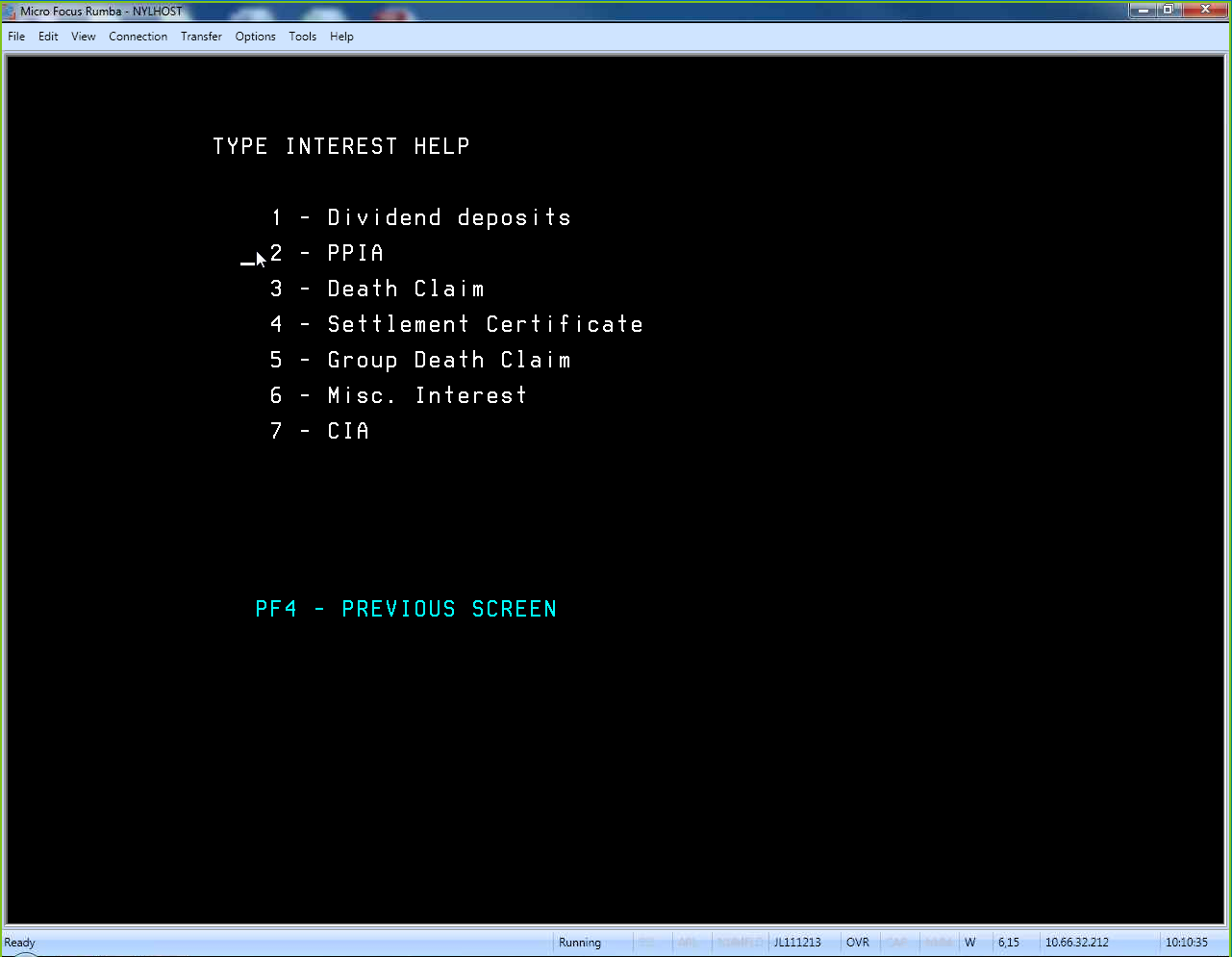 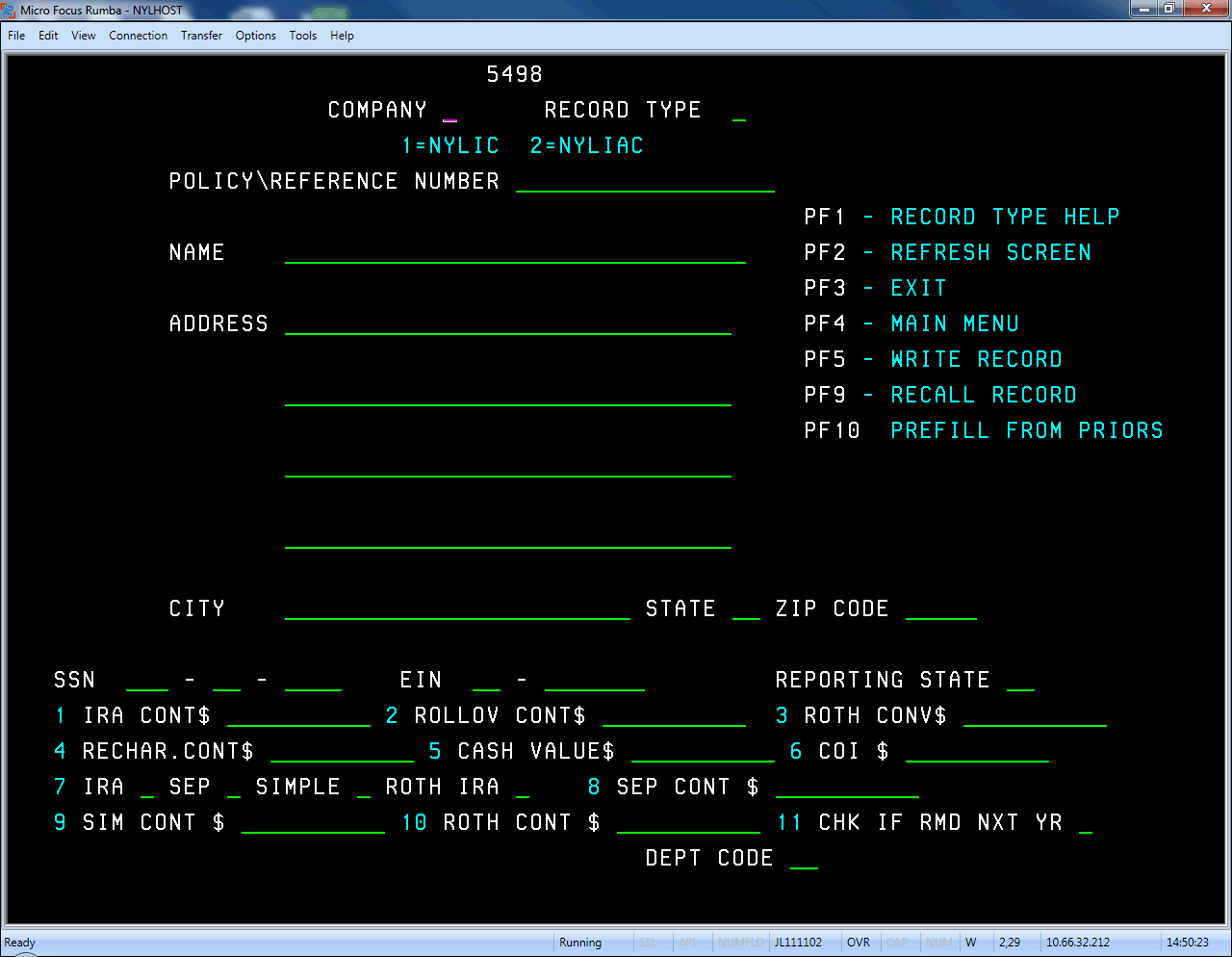 The old system was, to dramatically understate things, difficult to understand. In fact, it took so long to train new users, that very few Customer Service Reps used it–instead, each team had nominated at least one person who would deal with everything Tax related.

The only way we could hope to solve this problem is with extensive, hands-on research.

I was fortunate to be working with stakeholders who were committed to the UX process–and this proved to be invaluable to the project. After a high-level walkthrough, I organized three days of sitting with Users and observing them process tax changes, then conducted interviews with 10 different power users in New York, Austin, and Minnesota. The issues we would need to solve quickly immerged: 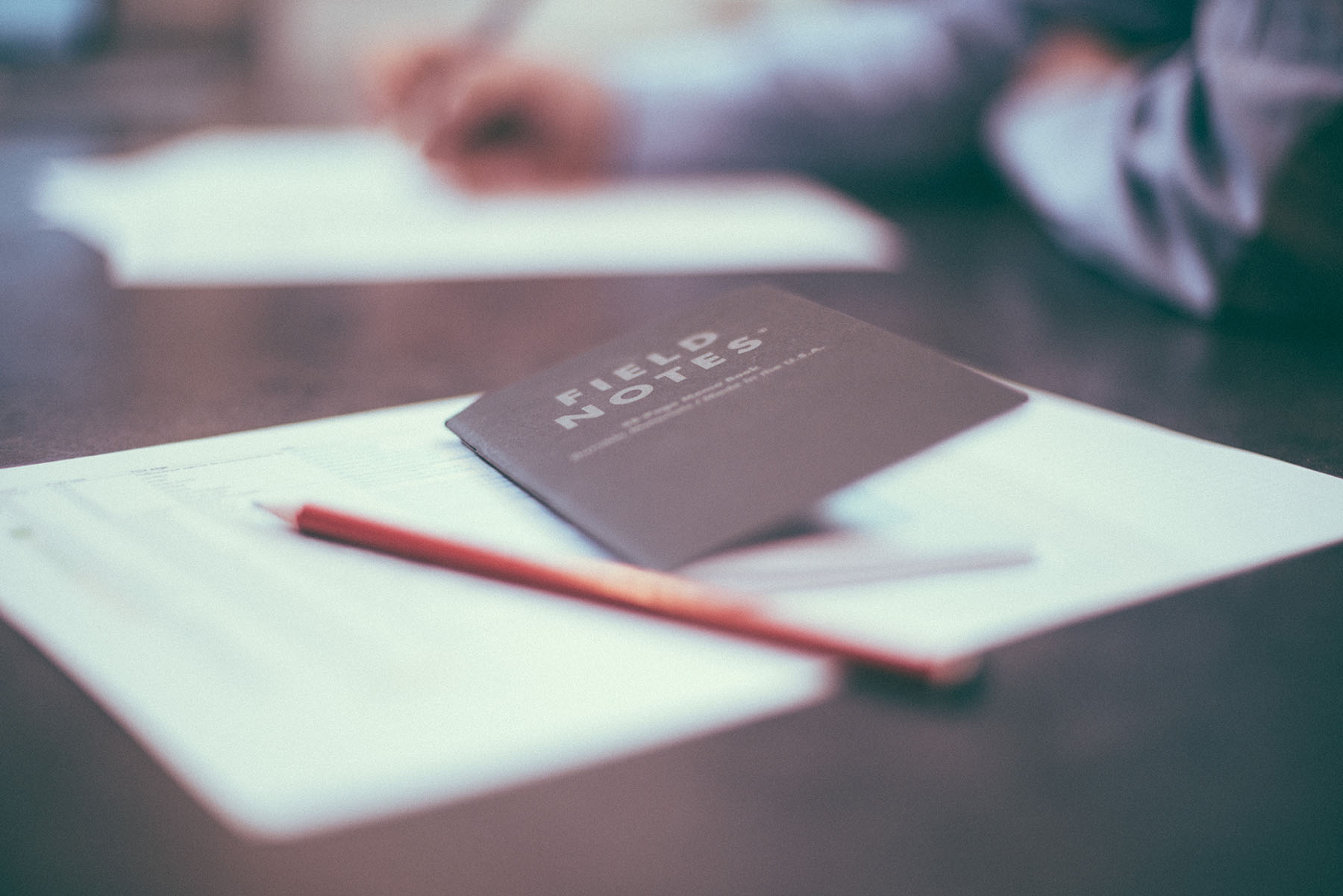 Before undertaking the formal wireframing, I assembled some of the Subject matter experts and the design team for a few days of ideation. We talked through the research, the user flows, looked at some examples from various sources, then did some sketching exercises.

Eventually, we settled on a framework that we thought would nicely support the functionality we wanted. We would test it as we did our wireframing. 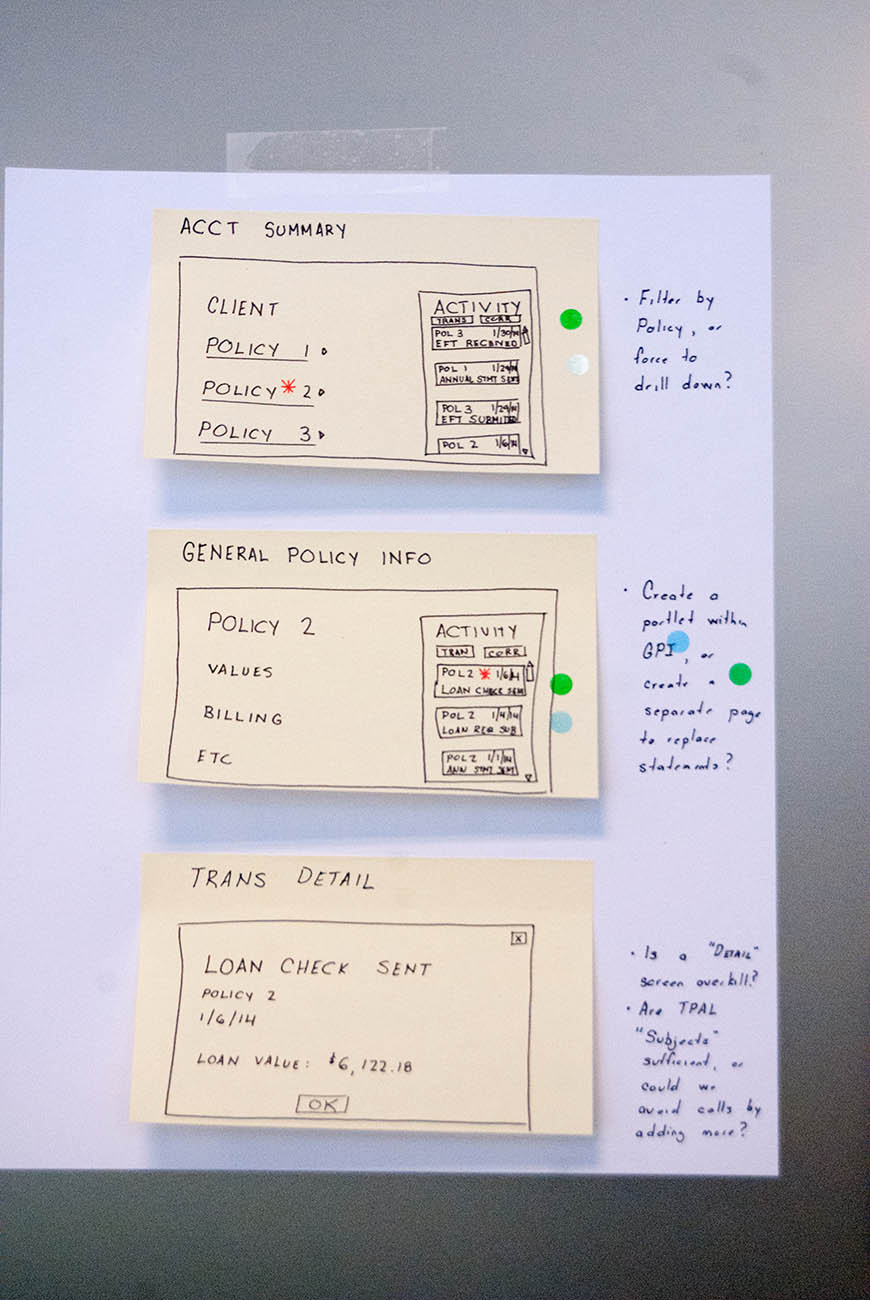 I set up a recurring meeting three days a week with the Key Stakeholder (also the product owner), developers, accountants, subject matter experts and a junior designer. Each week we tackled a new form the system would need to support, align on requirements, then start sketching out ideas about how to turn it into the easiest to use UI. By the end of the first meeting, we had most of the key requirements and a few different ideas for how to design it.

The Friday meeting was used to review the findings, talk about any additional adjustments that needed to be made, and/or sign off on direction.

Some forms were small enough that we were able to tackle two or three a week, so within 6 weeks or so, we not only had all our wireframes, we had a fully functional prototype that had been repeatedly tested by users.

One of our prototypes.

The wonderful thing about the cadence we’d established is that user testing was simply part of the requirements/wireframing phase. It wasn’t tacked on at the end, necessitating a huge round of updates and additional meetings where stakeholders had to remember what we’d talked about 6 weeks earlier–we worked on a form, tested the form, then updated it before we moved on to the next one.

It also meant that we were free to test multiple approaches to problems, so even if something tested well one week, we might change something up the next time to see if there better solutions out there.

Two findings, in particular, stand out to me:

The first: we had introduced a sort of “Timeline” feature on the new dashboard that allowed users to quickly pull up forms they or their teammates had updated. However, even though users were able without prompting to identify its use, they still attempted to search for a record they had just changed. Over and over again.

The solution turned out to be elegantly simple. When users returned to the dashboard, we waited a moment, then created an animation where the new record faded in and the others slid down. As soon as we added this animation, users immediately began using it to access records. My guess is that it not only added a subtle reminder but helped the users understand that it was dynamic.

The second major finding we discovered had nothing to do with the TXFM system and reminded me about the importance of understanding the bigger world in which software must live. On an especially complex form, we discovered that users had an incredibly complex approval process:

When we actually sat down with all these different people, however, we soon learned that the process was not only incredibly time-consuming but completely broken. Managers were typically not well trained on tax regulation or the system, so they almost always signed off any approvals that came across their desks. The company accountants, meanwhile, weren’t reviewing the records for approval–they simply needed to add it to their tax-tracking.

We solved the problem with an automated approval queue–managers received updated records that required their sign-off and were able to look at highlighted fields with help explaining what they should look for. When they approved, the record was automatically saved and a copy emailed to the accounting department. But we never would have noticed this thorny issue if we had just talked to users, rather than tried to understand the entire ecosystem.

In order to give the team an idea of the direction we’d take for design, I created a simple mood board outlining some of the principles I wanted to convey: Clarity, Simplicity, and Approachability. However, it was important that it still inherently felt like a New York Life branded application.

In addition to experimenting a bit more with color usage, I made the decision to exaggerate most of the app controls (form elements, buttons, etc.). This second choice was less about aesthetics and more about creating large targets for users who tended to be on the older side and often needed to be able to operate quickly while on the phone with customers. 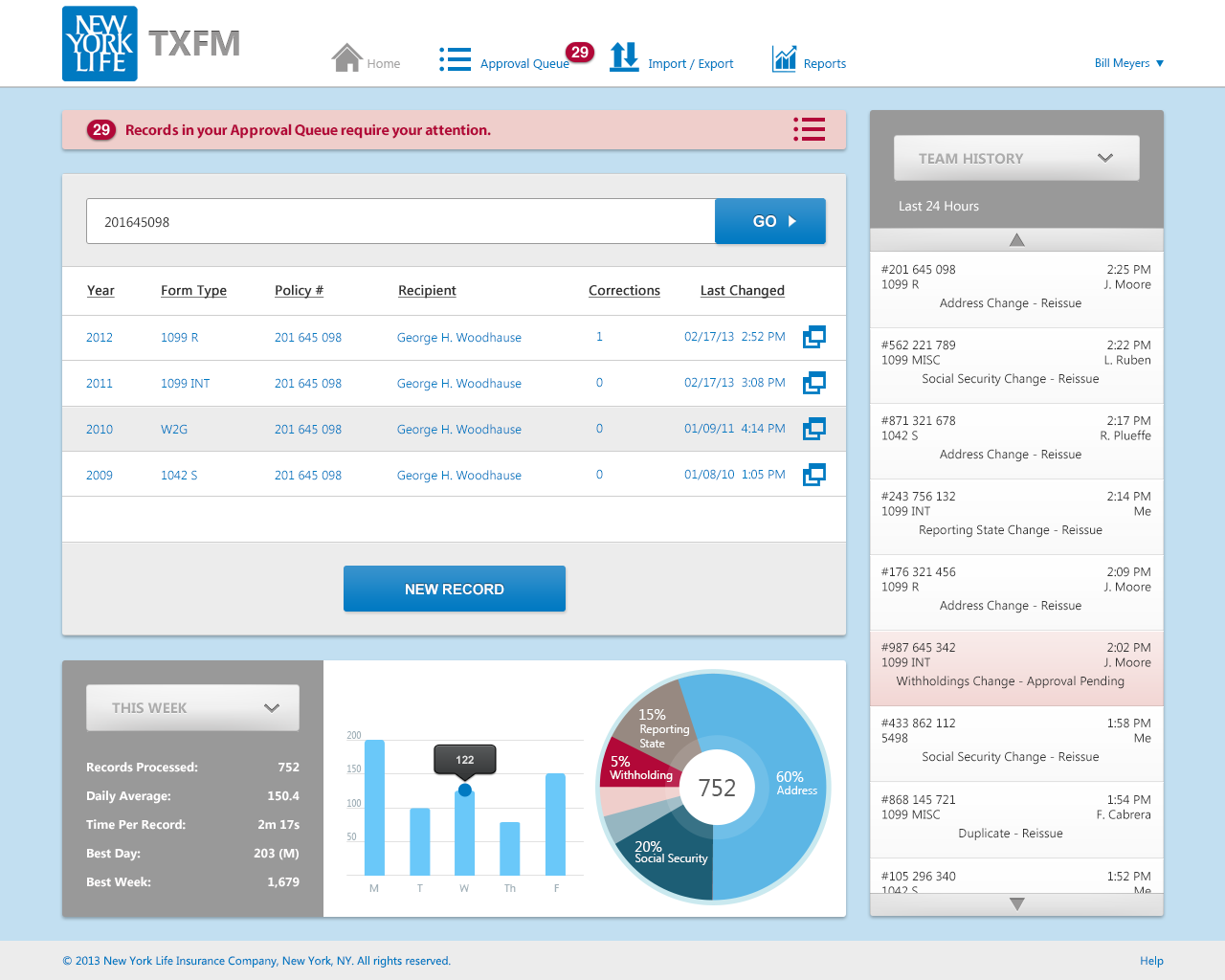 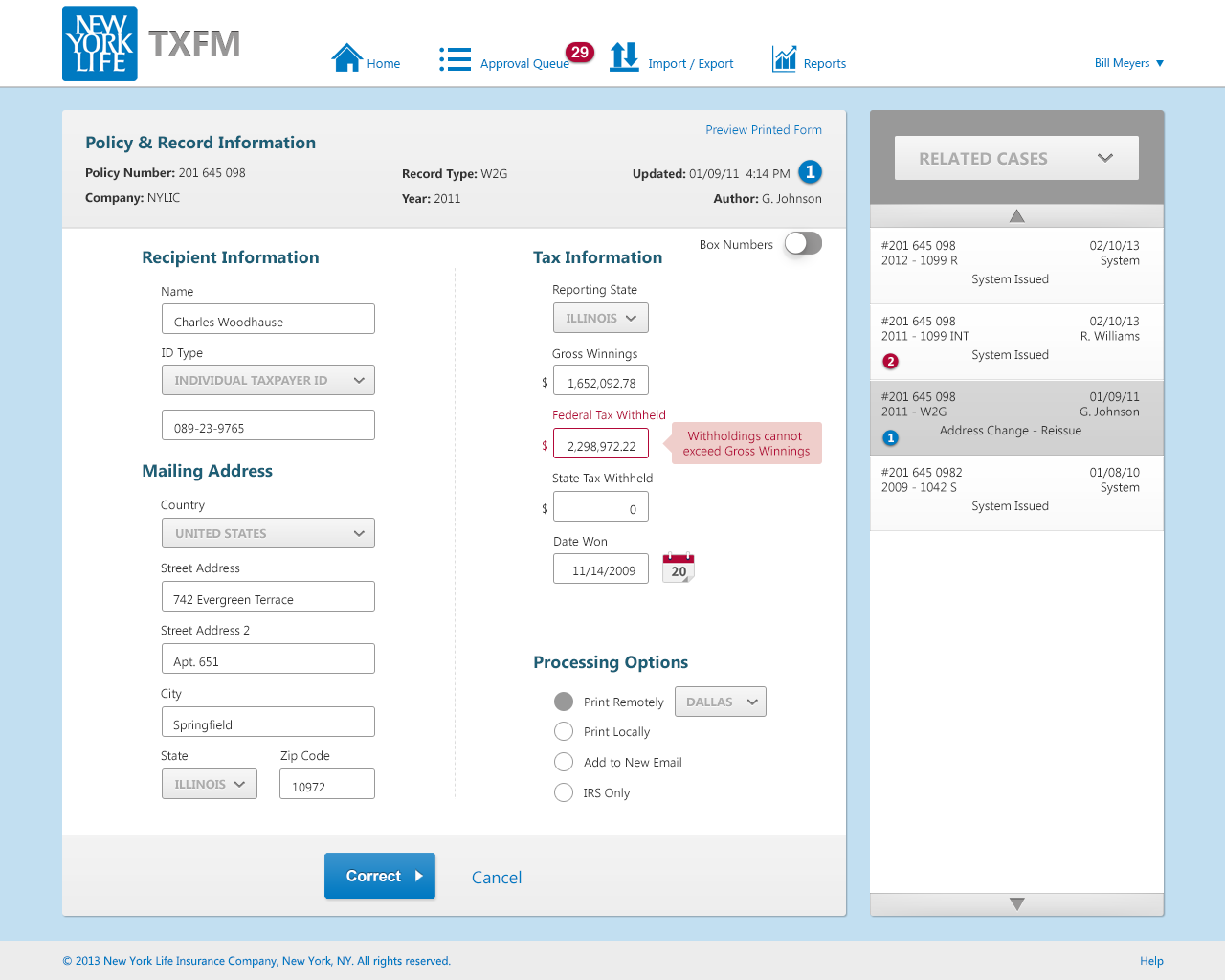 Outcome and What We Learned

Unfortunately, at the time when we would have begun ramping up development, the project was placed on hold so the team could work on a more urgent project. However, given the significant user testing the new design was subjected to, I’m confident that it represents a significant improvement.

I’ve already described some of the findings that user testing uncovered–but they represented large lessons that I’ve taken to heart:

This was, in retrospect, a thoroughly enjoyable project–which is probably surprising, given the very dense material and specialized functionality of the application. However, the process was not only incredibly rewarding but interesting too. The amount of time I spent talking to and working with the end users made it impossible not to feel their pain, to try to understand their struggles, and to push yourself harder to create something that would improve their lives just a little bit. 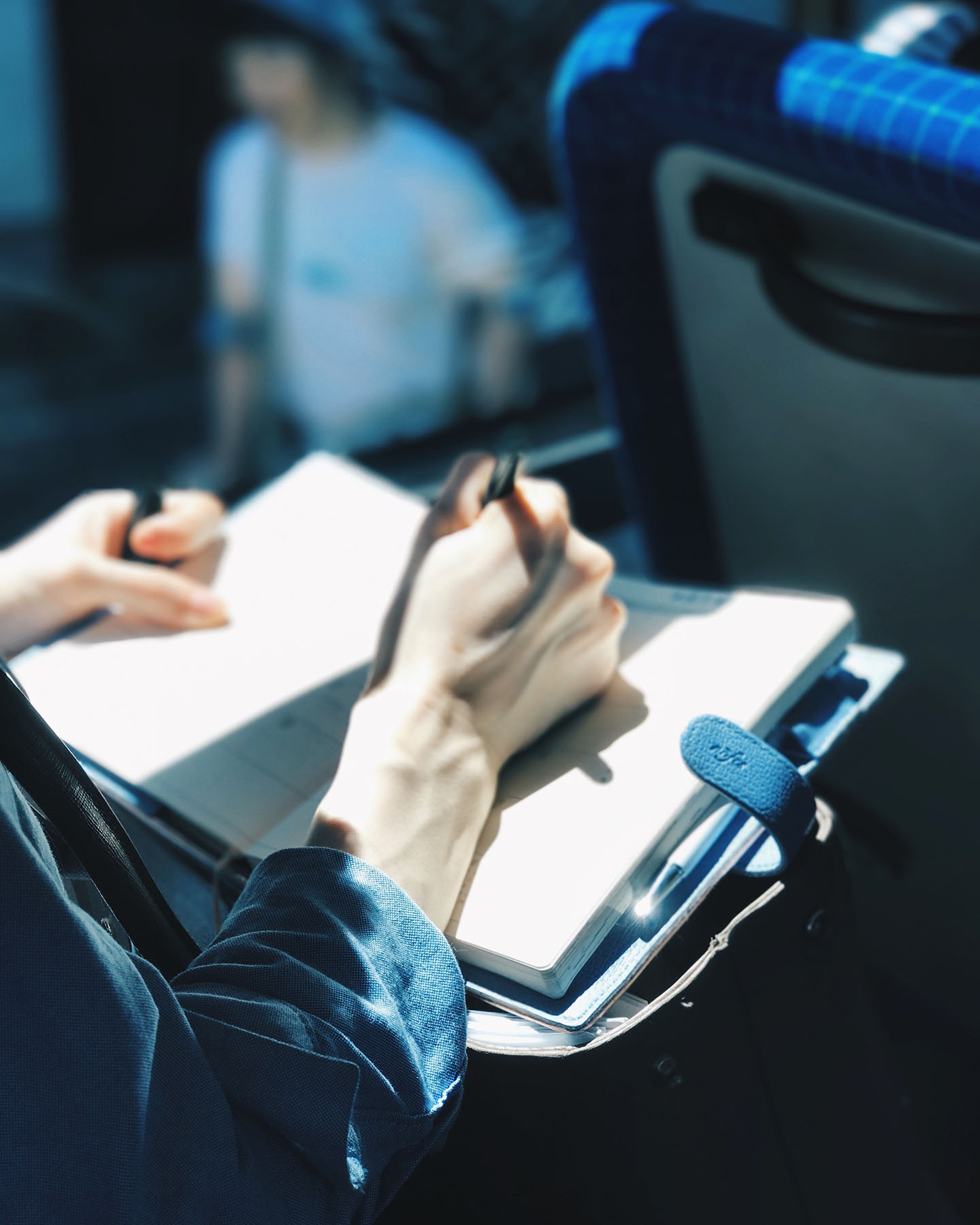